The North Amherst Fire Company
About Us

The North Amherst Fire Company was originally formed as the North Amherst Chemical Company on August 15th, 1929.  Frank Wolf was the first Chief, and 5 additional firemen.  Frank Wolf was previously the Chief of the Wendelville Fire Company.  At the time, Wendelville had members in Erie and Niagara Counties and responded to calls all over the area.

The new fire company was officially established in 1929 and approved by the Amherst Town Board on May 31st, 1930.  The Incorporation was filed on June 17th, 1931 and recorded at the Erie County Clerks Office.

The principle offices were listed as being Wendelville, Erie County, New York.

There were seven Charter Members and Directors as follows:

A used fire truck was purchased from the town of Bovaria, which was a cut down Packard with two tanks mounted on the rear.  The fire truck was kept in the grove of the historic Mohawk Hotel built in 1860. Chief Frank Wolf was the Proprietor of the Hotel. Most calls were phoned into the Hotel as phones were scarce at the time. The Mohawk Hotel was located on the Erie County side of the canal at Campbell BLVD. 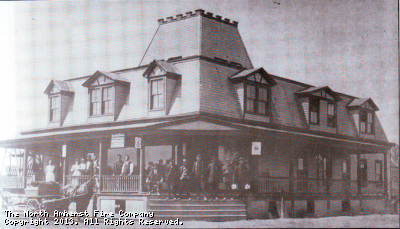 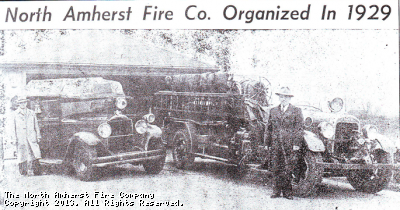 A Stewart Fire Truck was purchased after a short time, the Stewart was kept at the Eggertsville Fire Company until a garage was built for it

North Amherst was the first fire company to purchase an ambulance in 1947, which was a used Cadillac for $100. The demand was heavy for the ambulance.  The Amherst Bee reported in the 1950's a month were there were nine mutual aids with the Snyder Fire Company.  The Ambulance response area to calls was a very large area in both Erie and Niagara Counties. Finally, due to insurance restrictions, and the Town of Amherst assignments, the current smaller district was established in the late 1950's.

Copyright © 2006-2021. YourFirstDue Inc. All Rights Reserved. Designated trademarks and brands are the property of their respective owners. Content on this web site is supplied by The North Amherst Fire Company. YourFirstDue Inc. cannot be held responsible or liable for any content, text, pictures, or any other media found on this web site. Maintained by the members and staff of The North Amherst Fire Company.
Management Login
Powered by